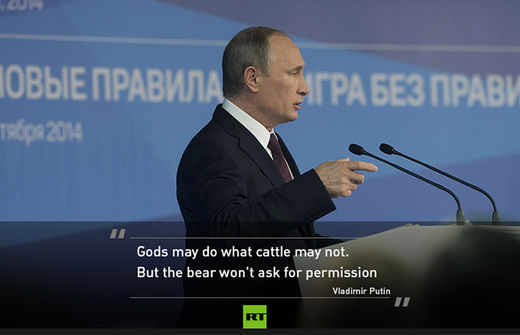 It was interesting to see Vladimir Putin flanked by two former prime minsters of European countries (Austria and France) when he spoke at the 11th Annual Valdai Club Discussion conference last week. Many other Western luminaries were in attendance, notably François Fillon, prime minster of France from 2007 to 2012 under Sarkozy (“l’Americain”). Fillon spoke at last year’s event, in which he criticized France’s stance against Bashar al-Assad. Also present was Ben-Ami Shlomo, former Israeli foreign minister. What, you wonder, could entice these Western notables to line up with America’s public enemy number one? Could it be that they see which way the wind is blowing?

The theme for this year’s meeting was: The World Order: New Rules or a Game without Rules? 108 policy experts, historians and political analysts from 25 countries, including 62 non-Russian participants, took part in the club’s seminars. The final day’s plenary meeting summed up the club’s work over the previous three days, which “concentrated on analysing the factors eroding the current system of institutions and norms of international law.”

While such high-brow conferences are regular fare for the attendees, I can’t imagine they’re used to hearing the truth spoken publicly. I mean, what Putin is saying today was ‘conspiracy theory’ yesterday. Here’s what Putin had to say regarding European leaders’ servility to Washington:

“I once spoke with a former colleague of mine from eastern Europe. He told me, with pride, “Yesterday I appointed my Chief of General Staff.” I was surprised. I said, [sarcastically] “Whoa, that’s an achievement!” He said, “Oh yeah, we cannot appoint a Defense Minister or a Chief of General Staff without endorsement from the U.S. ambassador, and that’s been the case for many years.” I was so surprised! I asked him, “Why?” He said, “Well, that’s the way things are. If you want to join the EU, you need to join NATO first, and if you want to join NATO, you need to have coordination with the U.S. ambassador. Then I asked him, “Why would you do that to yourselves? Why would you give up your sovereignty? What sort of investment did you receive from the West in return for this?” He said, “It was minimal.” I said, “What was the point then?”

Everyone should realize this, including our American partners: this is no way to treat your allies. You cannot keep your partners in such a humiliating position; you can force them to do something once or twice, but you cannot do that permanently, especially in Asia. There are nations in Asia that really use and value their sovereignty. There are not many countries in the world like that, but there are in Asia.

On U.S. interpretation of ‘international law’ with respect to Crimea joining the Russian Federation:

The decision to hold the referendum was made by the legitimate authority of Crimea – its Parliament, elected a few years ago under Ukrainian law prior to all these grave events. This legitimate body of authority declared a referendum and then, based on its results, they adopted a declaration of independence, just as Kosovo did, and turned to the Russian Federation with a request to accept Crimea into the Russian state.

You know, whatever anyone may say, and no matter how hard they try to dig something up, this would be very difficult, considering the language of the United Nations court ruling, which clearly states (as applied to the Kosovo precedent) that a decision on self-determination does not require the approval of the supreme authority of a country.

In this connection I always recall what the sages of the past said. You may remember the wonderful saying: ‘Whatever Jupiter is allowed, the Ox is not.’

We cannot agree with such an approach. The ox may not be allowed something, but the bear does not need to ask for permission. Here we consider the bear to be the master of the Taiga [northern Russia], and I know for sure that it does not intend to move to any other climatic zones – it would not be comfortable there. However, it will not let anyone have its Taiga either. I believe this is clear.

“This is how nouveau riche behave – they start squandering their gains.”

“There is evidence that Big Brother spying is used for blackmailing leaders around the world.”

On one country being above all others:

“A unipolar world is basically an apology for dictatorship.”

“Those who carry out these color revolutions consider themselves masterminds, and they cannot stop themselves.”

On criticism of Russia’s treatment of mass demonstrations:

“And where is Occupy Wall Street? The U.S. government strangled it in its cradle.”

As the conference got underway, the CEO of French oil giant Total, Christophe de Margerie, was killed in a plane crash at Vnukovo airport in Moscow. He hadn’t been scheduled to attend the conference, but he had just come from a meeting with Russian prime minster Dmitry Medvedev. Putin called for a minute’s silence prior to the final day plenary session got underway. In the aftermath of De Margerie’s death, Russian press had reported the crash as an accident, saying that his private Falcon jet clipped the top of a snowplough that the pilot hadn’t seen on the runway until it was too late to abort take-off. The pilot had been reportedly drunk as a skunk.

However, in the days since this ‘accident’, the snowplough driver’s lawyer has insisted he was stone-cold sober and had passed a medical exam just before work that day. This was followed by statements from a Russian investigative committee: “It is obvious that what happened was not caused by a horrific, tragic confluence of events, as airport spokesmen are trying to present it, but by the criminal negligence of officials who could not properly synchronize the work of the airport employees.” The airport’s director, his deputy and other managerial staff have since been fired, while four other employees were arrested as suspects by Moscow police, who are investigating a conspiracy angle to De Margerie’s sudden death.

Was De Margerie’s death a warning message to other industrialists and leaders in Europe? ‘Stray too close to the Bear and ‘the gods’ will punish you’? De Margerie said this summer:

“If European gas supplies from Russia are halted, Europe will have to pay more for gas, buying it from more remote regions, and shipping it will become more complicated. We will have a problem this winter if there is a cut in supplies and if it is cold – that is obvious. Can we live without Russian gas? The answer is no. Are there any reasons to live without it? I think … it is a no.”

“There is no reason to pay for oil in dollars. Doing without the (U.S.) dollar, that wouldn’t be realistic, but it would be good if the euro was used more. The dollar occupies too large a niche in the international oil and gas trade. The fact that oil prices are quoted in dollars per barrel does not mean that payments actually have to be made in that currency. There are no valid reasons to pay for hydrocarbons in the American national currency.”

And this was his last ever public statement:

“Russia has a lot of friends and partners in the West. We don’t consider that Russia can be isolated from the major global economic and political process. I’m absolutely confident that the policy of openness, which helped us overcome so many obstacles together in the past, should be continued.”

One final aside: there was another mysterious death just as the Valdai event came to a close. On Thursday October 24th, Israeli police announced the death of 49 year-old French-Israeli entrepreneur Thierry Leyne, who “committed suicide on Thursday by jumping out of his Tel Aviv apartment.” Leyne’s Luxemburg-based ‘Anatevka’ investment banking firm was in the process of launching a “$2 billion global macro hedge fund”, thanks in part to the contribution of Dominique Strauss-Kahn, who bought a 20% stake in Leyne’s company – now called ‘Leyne, Strauss-Kahn & Partners’ – last year. His daughter, Vanessa Strauss-Kahn, was slated to run the fund. Leyne and Strauss-Kahn (aka ‘DSK’) had reportedly been meeting potential investors in China over the last year.

In June this year, Christian Noyer, governor of the Bank of France, discretely signed a deal with the People’s Bank of China, agreeing to establish a payment system in Paris for transactions denominated in renminbi (or yuan, both names for China’s currency). Noyer has been France’s head banker since 2003, and Chairman of the Bank of International Settlements – the “Central Bankers’ central bank” – since 2010. Meanwhile DSK has become an ‘adviser’ to the Serbian government… and a board member of both the Russian Regional Development Bank – a banking subsidiary of oil giant Rosneft, Russia’s ‘Total’ – and the $10 billion Russian Direct Investment Fund.

Now, it could be that DSK – tainted by sex scandals – just couldn’t find a job anywhere else. And it could be that De Margerie was just unfortunate. But in the ‘uncertain climate’ generated by wide-eyed U.S. reaction to Russian and Chinese moves in Eurasia, I get the feeling European elites are turning east.